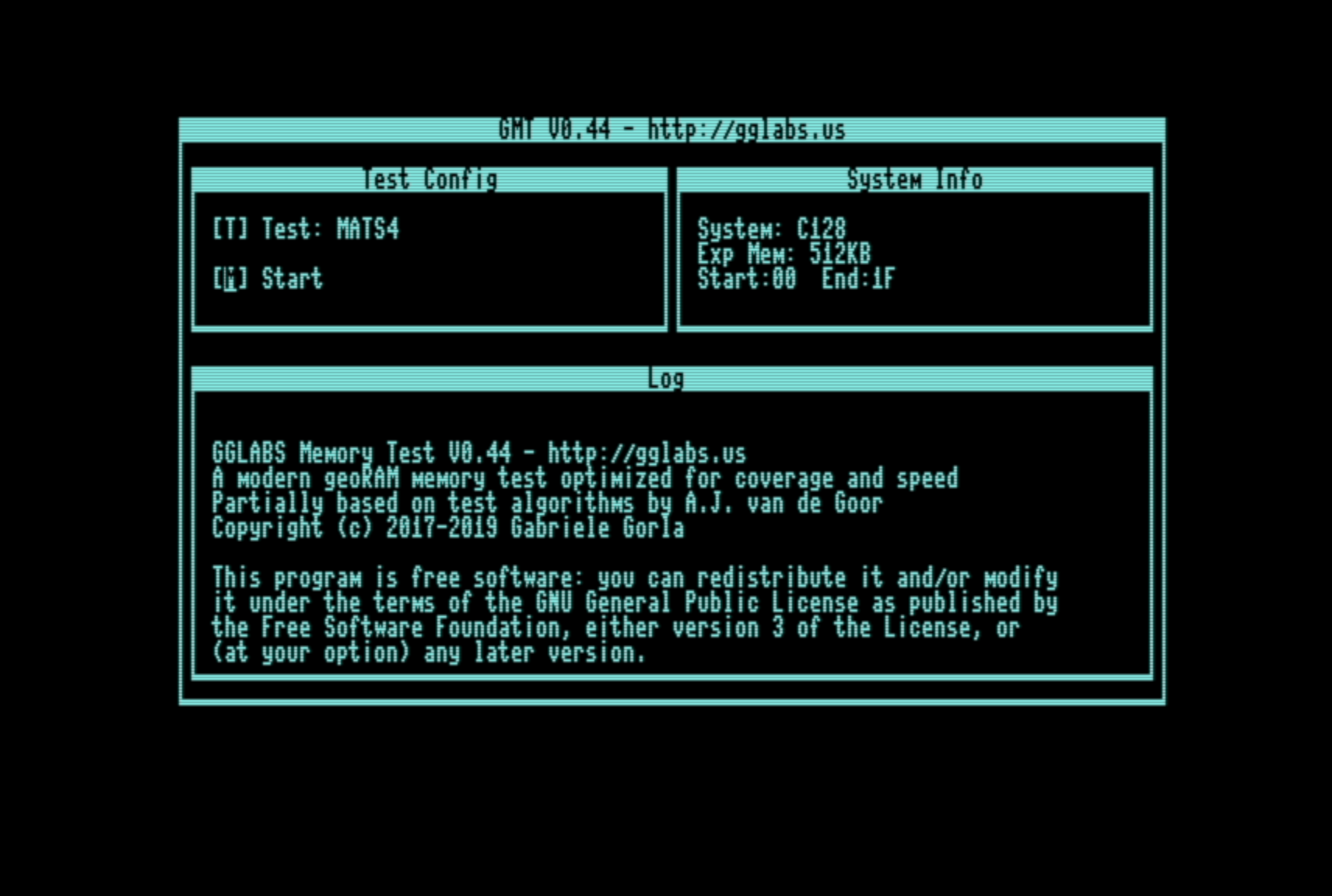 GMT (GGLABS Memory Test) is a new developed memory test for vintage computers optimized for speed and coverage. The code is based on the test algorithms described in "Testing Semiconductor Memories: Theory and Practice" by A.J. van de Goor. The program is mostly in C plus small sections in assembly. It is free software and released under the GPL v3 license.

GMT V0.44 supports Apple IIgs memory expansion and geoRAM on Commodore 64 and Commodore 128. The Commodore 128 version can currently only run in 80 column mode.
For the apple IIgs bootable images are provided in the binary archive. For Commodore machines standard prg executables are provided in addition to 16k images suitable to build a C64 or a C128 cartridge. A properly programmed Flash ROM can be used with the GGLABS UNICART.

The screen is divided in three sections. The System Info window will display information about the system and, while running a test, the currently tested bank and pattern. The Test Config window shows the current selected test and the control keys. T selects the test to perform (see sections below for a description of the tests), enter starts the test and Q reboots the system.
The Log window, as the name states, logs the start/end of a test and eventual errors.

The numbers are error bank, error address, expected value, original read which triggered the error, 1st re-read, 2nd re-read, 3rd re-read, bad bits. On the IIgs the values are all 16-bits as, for performance reasons, GMT implements 16-bit reads and writes on the 65c816. On the Commodore 64/128 the values are 8-bits.
The bad bits value is a bitmask showing which bit is bad (a 1 in a specific bit position means at least one read had a miscompare for that specific bit). 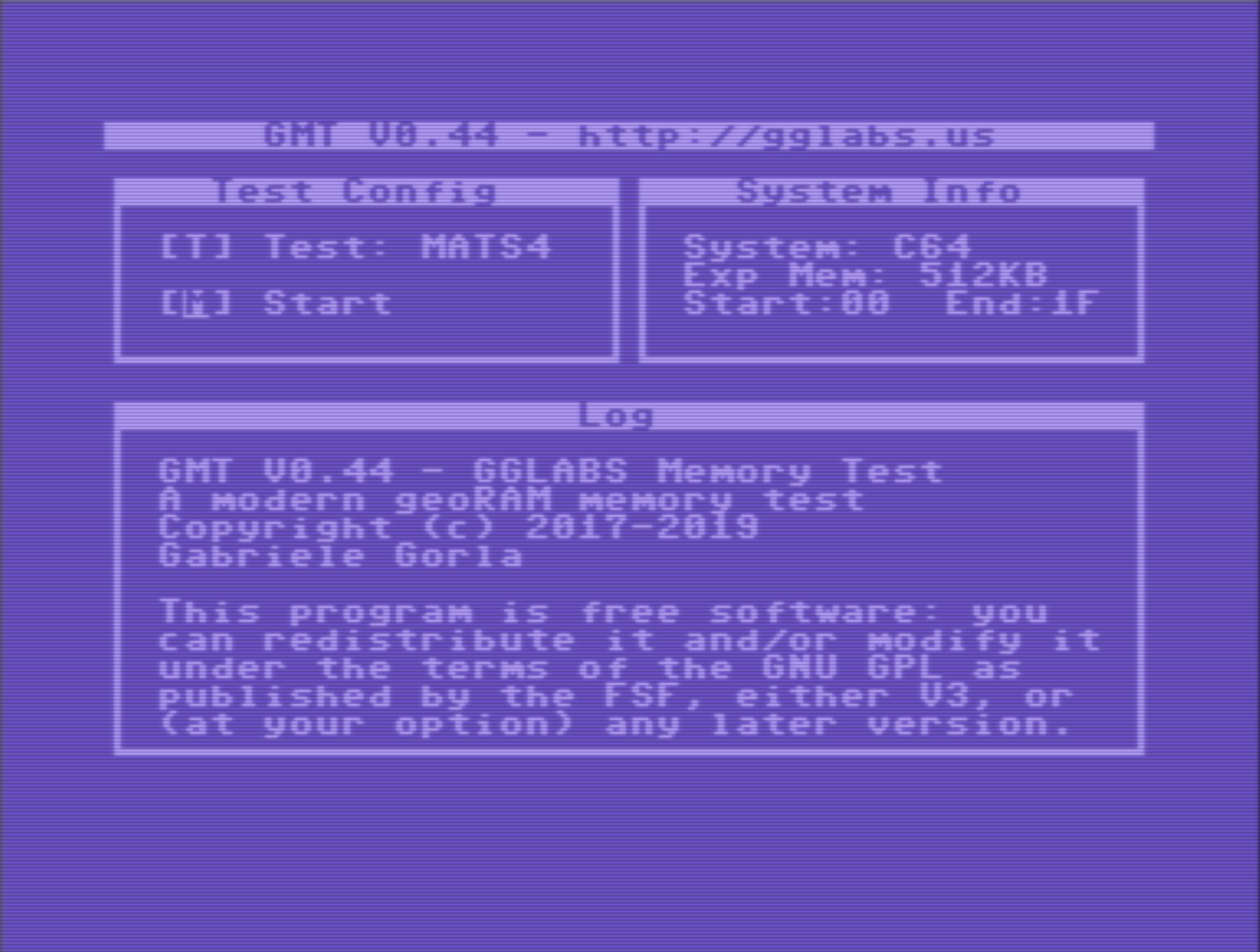 The executables for all supported platforms are included in the binary archive. There are multiple programs for the apple IIgs: the generic GMT (gmt140.po for 140K disks, gmt800.2mg for 800K disks) and two versions specifically meant to test RAMGS/4 (ramgs4.2mg) and RAMGS/8 (ramgs8.2mg).
The RAMGS versions have no options. Will start the test immediately and report pass or fail.
For the Commodore computers there is the generic GMT version for the C64 (gmt64) and C128 (gmt128) plus multiple version to test the GRAM/1D and GRAM/4D.

MATS tests are a family of tests designed to find coupling faults within a memory array. It has the same coverage of an exhaustive walking ones/zeros with a much smaller number of write/read passes.
The test also checks for faults sensitive to the previous content of the memory (background pattern) and read induced faults. Three version of the MATS test have been implemented: 4, 8 and 16-bit (16-bit is only available on the IIgs). 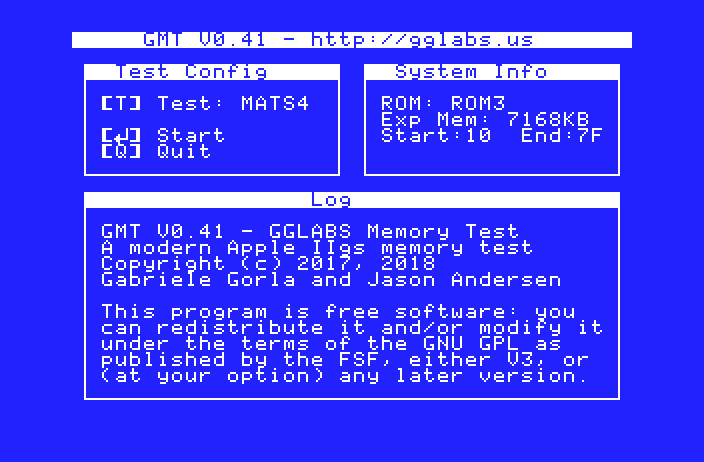 This test stresses back to back read and writes. It is available only on the IIgs as it is not possible to generate arbitrary back to back writes on a 6502. The basic pattern is a walking 1 sequence. For every value in the sequence the true and complement are written back to back. This generates a pattern that flip all data bits every memory transaction which stresses the memory interface.