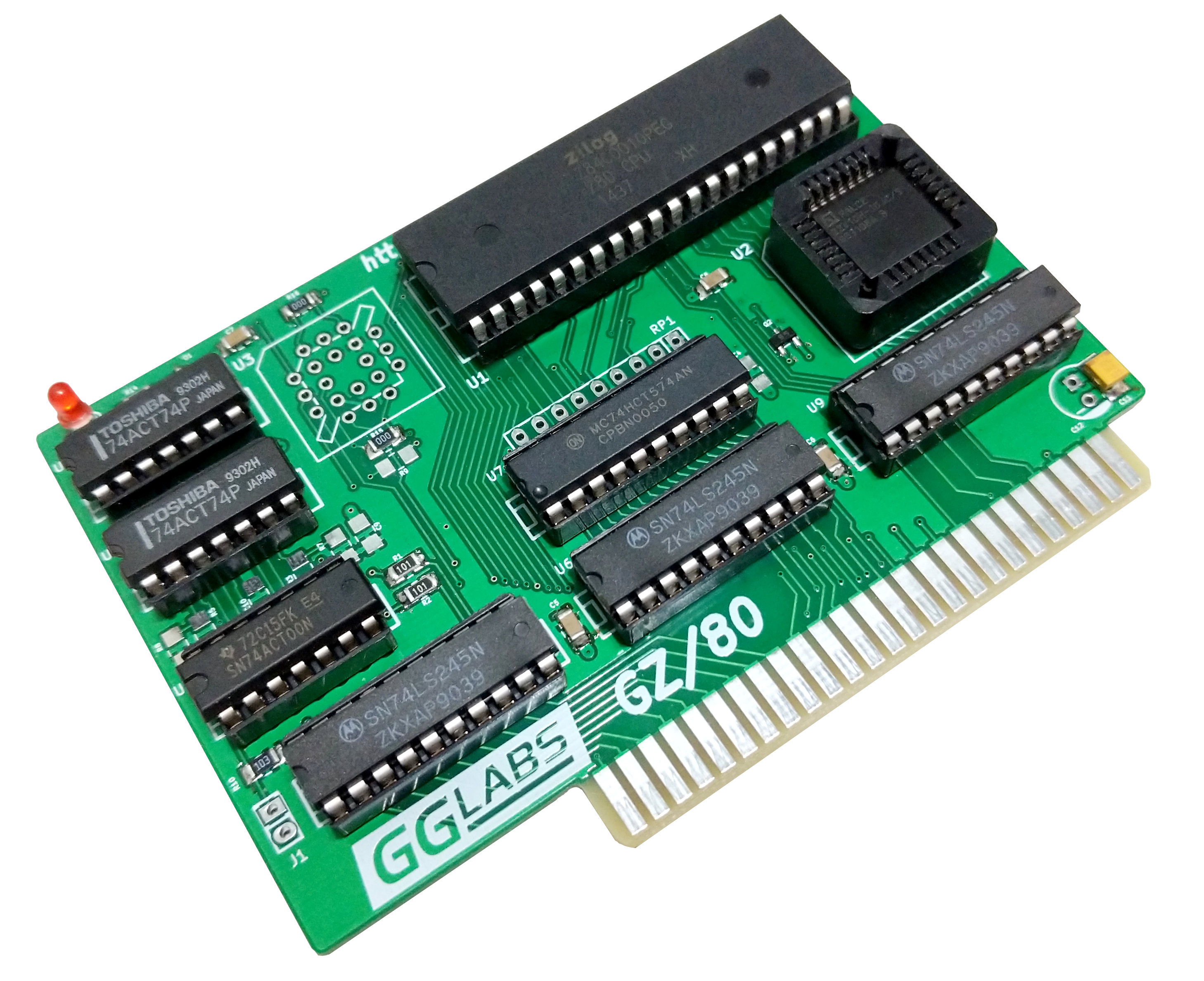 The Microsoft Softcard was the first card to allow CP/M software to run on the Apple II. It was originally developed to simplify the porting of Microsoft Basic to the Apple II. It turned out to be a great success and at some point in time it was the most popular CP/M platform in use.
This success prompted the development of many compatible cards. Some exact copies, some enhanced or cost reduced. The GZ/80 is a modern implementation of a Softcard compatible card.

In all SoftCard compatible cards the Z-80 runs only during PH1 and uses the Apple II main memory for all processing. This makes the schematics pretty simple. The Z-80 is connected to the Apple II address and data bus using 3 octal tri state buffers (U6, U8, U9). The 74LS245 bi-directonal buffer was used because the pinout is a better match for the design vs. the uni-directional 74LS244. The D-flipflop U10A and the NAND U4C generate a syncopated 2MHz clock very similar to the original SoftCard. The additional gates in U4 buffer the clocks for distribution on the card.
The 74LS573 latches the apple II data during PH0 so the Z-80 can access it during PH1. the dual D-FlipFlop U13 is used to turn the card on and off. The GAL U2 perform the address translation and generates the remaining control signals. The GAL U3 is to experiment with higher Z-80 clock speed but we could not get it to work without extensive rework to the PCB (see below).

We tested the GZ/80 using many versions of CP/M and all worked as expected. On the IIgs the card, similarly to the originals, require the system to be put in "slow" mode and set the slot where the card is placed to "own card".
Our team particularly liked the AE CP/AM 5.1.1 as on a IIgs it allows to boot and operate exclusively on 3 1/2" floppies. CP/AM also seems to support smartport based hard drives, but we did not have enough time to test this functionality. 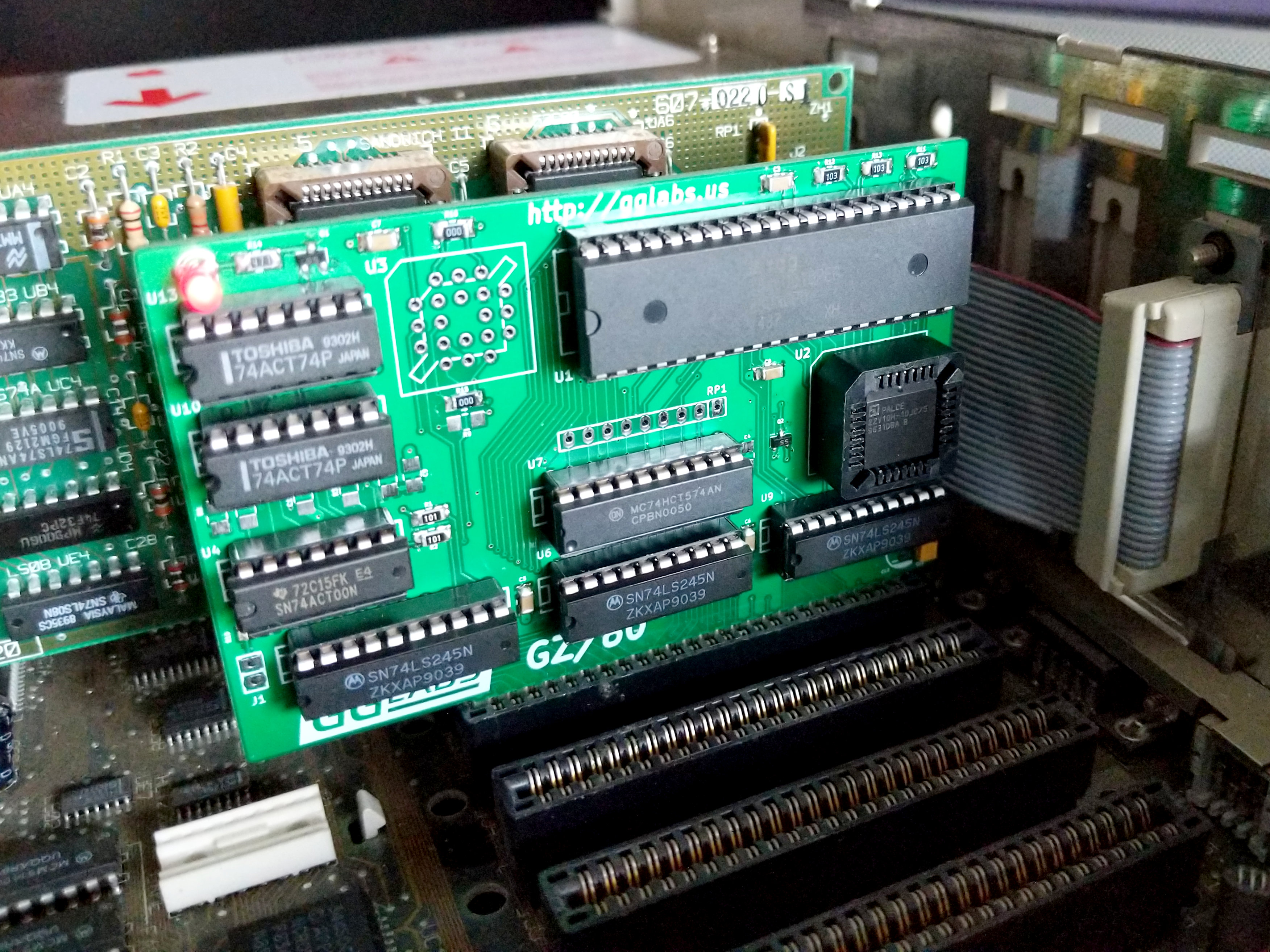 Analyzing the bus timing of the Z-80 and the Apple II it becomes evident that the Z-80 could run faster than the 2MHz of the original SoftCard. The GAL U3 was placed on the board to generate the additional control signals to support faster Z-80 speeds. For the faster clock the obvious choice was to use the 7MHz clock already present on the apple II bus. Because the memory access are limited to 1MHz the effective speed is usually around 4MHz (which is slightly less than double the SoftCard).
However we discovered several timing issues in this configuration and to get it working it required extensive rework to the card. In addition the higher Z-80 speed does not allow enough time for 6502 refresh cycles preventing the card from working on Apple systems equipped with the NMOS 6502. Only systems with a CMOS 65C02 or a 65C816 work properly in this configuration. 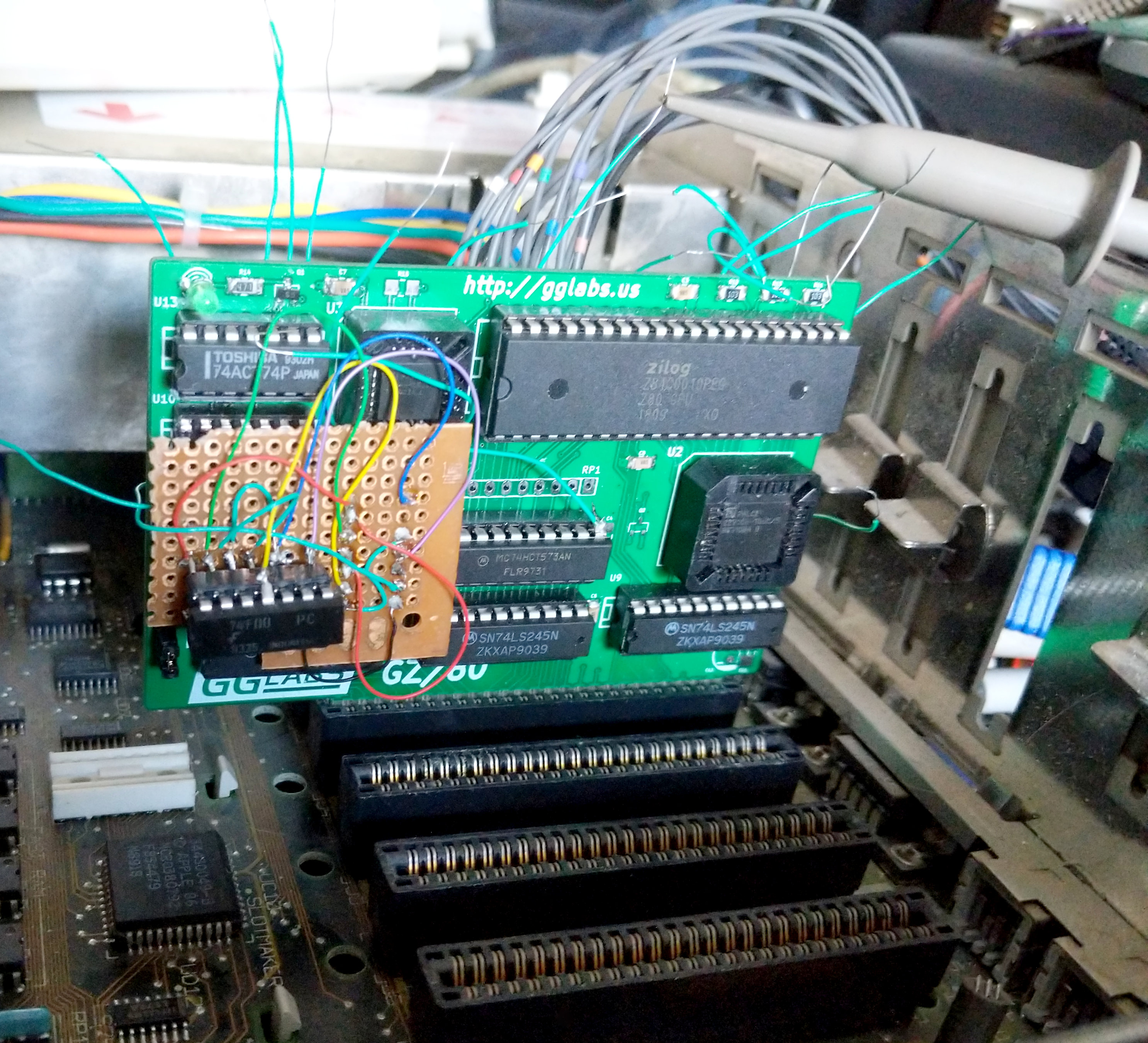